Sign out
Our Story Meet our Lemons Careers at Lemonaid 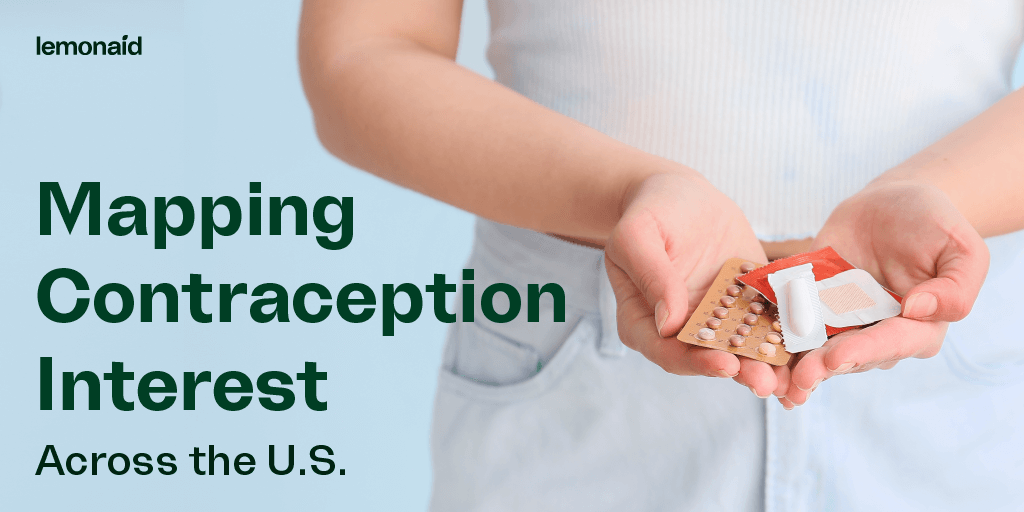 The ’60s gave us everything from bell-bottom jeans to lava lamps, and the first-ever oral contraceptive, which was a mix of estrogen and progesterone — a.k.a. a combination birth control pill. When it comes to contraception, there are so many more choices out on the market today than your grandparents had access to. From female condoms to IUD implants to vaginal rings, short and long-term birth control options are plentiful!

While managing periods and STD prevention are two of several motivators for females seeking contraception, others are taking family planning into their own hands and postponing or forgoing parenthood altogether.

At a time when some feel that the desire for body autonomy is threatened due to the recent U.S. Supreme Court decision on Roe v. Wade, the team here at Lemonaid Health wanted to find out more about female contraception interest in the U.S. and provide some information about birth control options. So, whether you’re looking for alternatives or just want to discover the most widely searched-for contraception in your state, keep reading for a behind-the-scenes look at contraception interest across the country!

To find out what different states are searching for more often than others when it comes to contraception, the team at Lemonaid Health analyzed Google Trends search data from August 2021 to August 2022. We started with a list of 15 common contraceptive methods and compared their relative search interest state to state.

Google gives each searched query a value of 0 to 100 based on how often that term is searched compared to all other searches in an area. It then ranks states based on that proportion to paint a picture of how frequently a term is searched across the country.

Now, let’s take a closer look at how short and long-acting contraception research differs from state to state.

The Top-Searched Form of Contraception in Every U.S. State 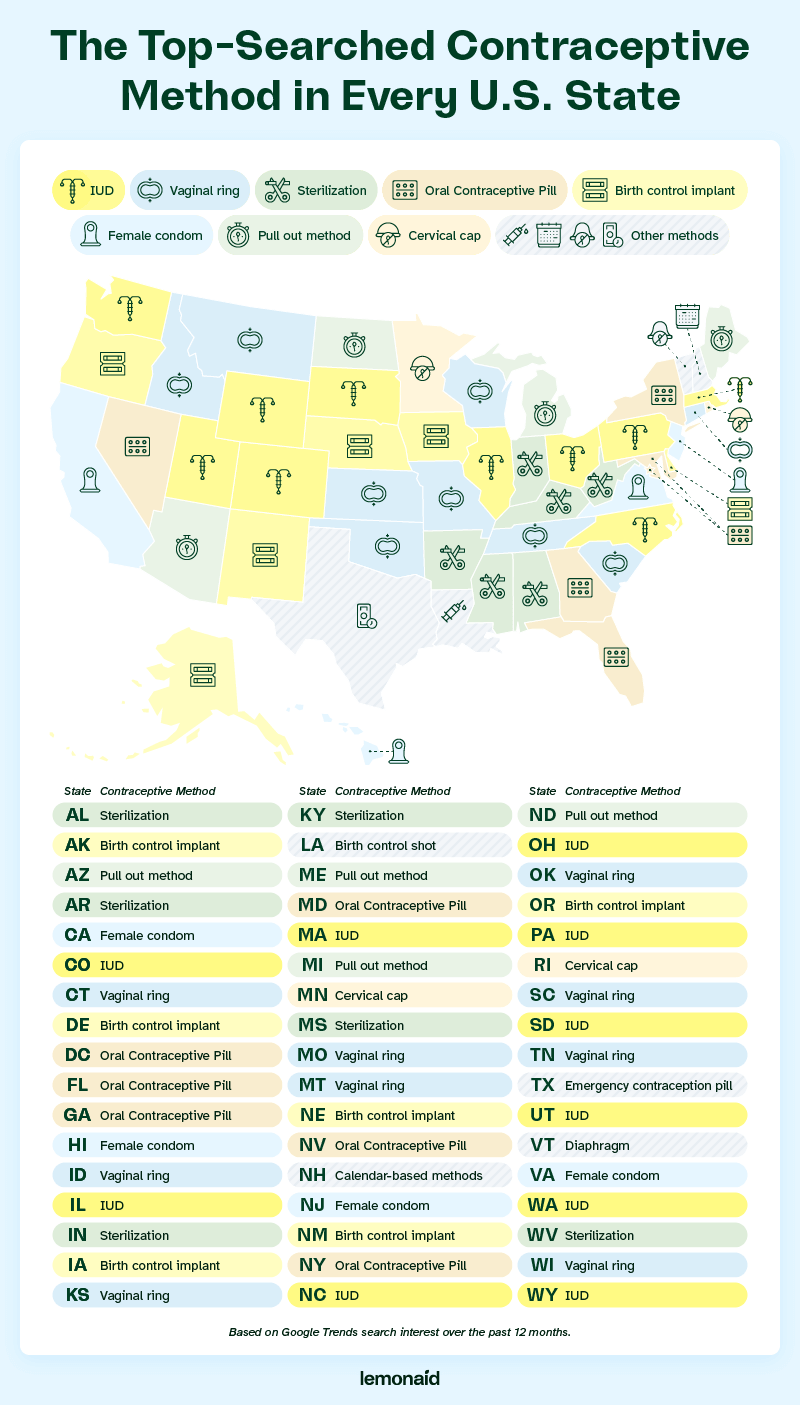 As the contraceptive market is projected to reach $16.8 billion by 2028, it’s no secret that each state has its preferences. The female condom was popular in California, Hawaii, New Jersey, and Virginia. Interestingly, California recently banned stealthing, the practice of removing a condom during sex without the consent of your partner. This could drive interest in learning about other condom alternatives like the female condom — which puts more women in control.

The pull-out method had the highest search interest in places like Arizona, Maine, Michigan, and North Dakota. While it’s often viewed as one of the most unreliable methods of birth control, nearly 40,000 women in North Dakota live in contraceptive deserts (counties with limited health centers unable to meet the needs of the women who qualify for publicly funded contraception), creating one possible reason why the pull out method is the most searched contraceptive in the Peace Garden State.

Texas had the highest search interest for the emergency contraceptive pill, a morning-after pill used to prevent pregnancy after unprotected sex. According to March of Dimes, Texas scores low when it comes to the health of mothers and babies, perhaps driving the interest in learning more about the morning-after pill.

The Top-Searched Forms of Contraception Overall 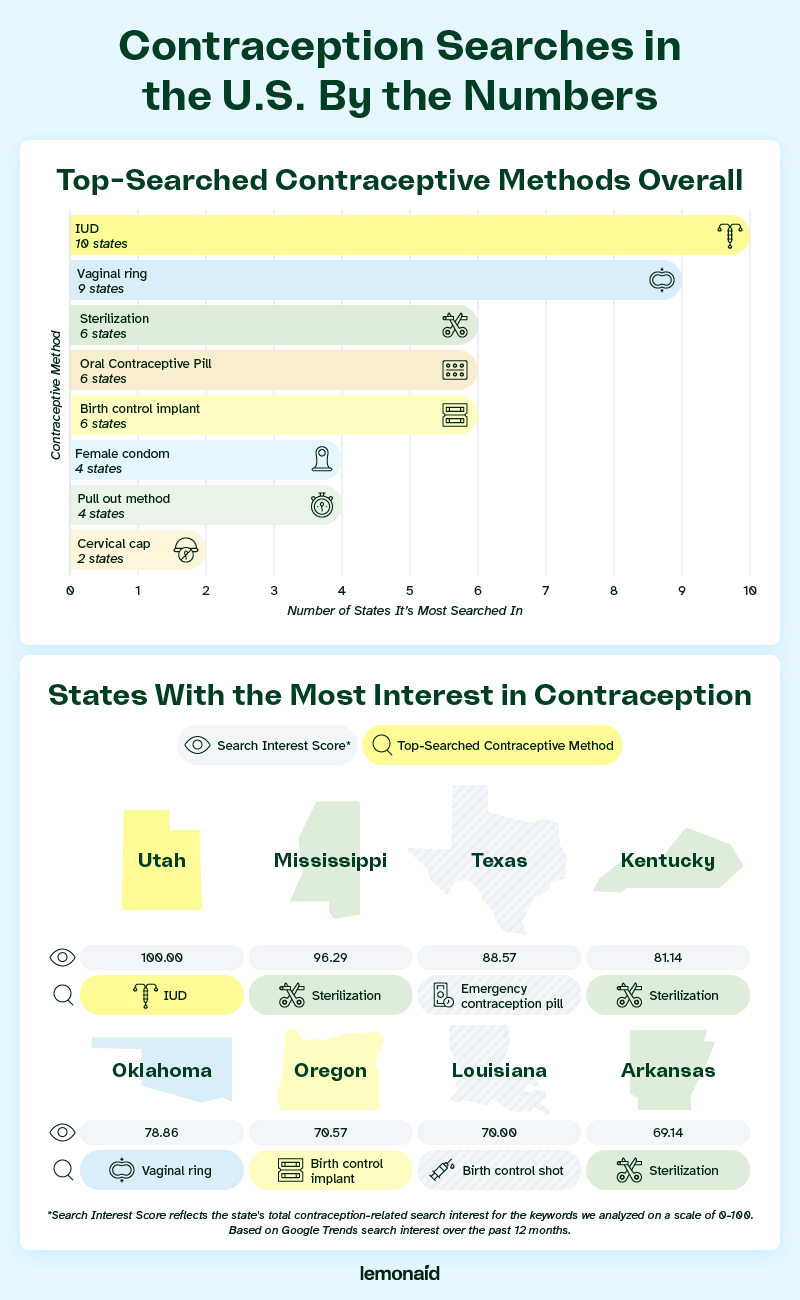 When it comes to sexual health, many of the top search contraceptives were long-acting, reversible contraception options, such as the IUD Implant, a.k.a. an intrauterine device. Utah (100 out of 100) had the highest search interest for contraception with the IUD implant as their top-searched method.

One statewide poll revealed that 27.25% of women in Utah felt that cultural expectations about gender roles were one of their biggest challenges in the Beehive State. As birth control is strongly intertwined with the female liberation movement, perhaps the interest in IUDs is one way this state is pushing back against stereotypical gender roles.

Mississippi (96.29 out of 100) had a high search interest for sterilization (tubal ligation), a process where women get their tubes tied. Though it is a completely legitimate process today, Mississippi previously passed sterilization legislation that adversely affected black mothers who relied on government assistance, making them choose between a prison sentence or submitting to sterilization if they had a child out of wedlock.

Oregon is home to the Oregon Permanent Contraception Research Center, which opened in 2014 with a grant by the Bill & Melinda Gates Foundation. Their goal is to develop permanent nonsurgical contraception that is safe and effective, which could explain the state’s intrigue in the birth control implant, a form of contraception that lasts up to 5 years.

Mapping Abstinence Searches in the US

Aside from North Carolina and Oregon, the remaining southern states (Mississippi, Arkansas, and Louisiana) are abstinence-only education states, which focus on emphasizing the path of abstinence compared to other contraception or condom alternatives. Coincidentally, Arkansas, Louisiana, and Mississippi have the highest teen pregnancy rates in the country. 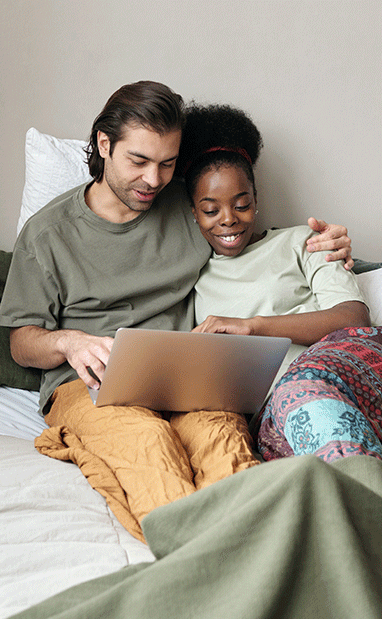 To round out our analysis of contraception interest in the U.S., we found out the questions that are most often asked about birth control, emergency contraception, and IUDs using the search engine tool Ahrefs. We then had Dr. Matthew Walvick, who leads Lemonaid Health’s Medical Team, answer them.

Some states leaned toward the birth control shot while others were more intrigued by the pull-out method. Once we tallied the results, the IUD implant and the vaginal ring were the most-searched contraception methods overall!

The first step in taking charge of your reproductive health is by learning about different types of contraception. At Lemonaid Health, we deliver convenient, flexible, and affordable healthcare right from the comfort of your own home. Learn more about our birth control services or get help in choosing the best short or long-term birth control for you!